Beyonce has changed my life you guys. This was the BEST WEEKEND EVER!!!! I literally prayed for this. Every since she announced that she was headlining for Coachella last year, I prayed that some how some way I would be able to go to see Bey perform. Don’t tell me the Lord doesn’t answer prayers!

After witnessing that greatness LIVE, I am no longer the same person. Coachella was cute but one and done. I told everyone I know the only way I’m going to Coachella is if Beyonce is on stage. If it wasn’t for Bey I would have NEVER been out in the desert with thousands of people on my feet for 3 straight days lol …

Early Friday morning my mom, my sister, my sister’s best friend, my god sister, and I took a 7 hour road trip down to Palm Springs. About 4 hours into the road trip I realized I left my Coachella pass at home. My wrist band and shuttle pass that I paid over $500 dollars for was all the way back in Elk Grove. As I was having a mini breakdown, my sister called Coachella’s box office to explain the situation. The customer service agent confirmed that I could pick up a replacement wristband and shuttle pass as long as I had my original receipt, my ID, and the Visa card used to purchase it. I was holding my breath the rest of the car ride praying I could get a new wristband. I would have DIED if I made it that far and did not get to see Bey.

Once we made it to Indio, CA, I went to Will Call and had no problems getting my replacement pass. THANK GOD!

After getting dressed we walked to the shuttle, excited to start our first day of the festival. It felt like we waited forever for this weekend. While in line for the shuttle we met two guys from England, Aaron and Ashley (Ash). They were super cool. While we all were waiting for the next shuttle, a few of us walked to the grocery store near by to get some drinks. This was the beginning of our turnt up weekend with our new friends.

The first person we saw perform was Daniel Caesar. He sounds amazing live. He has a great stage presence and he has the voice of an angel. Even his background singers were on point.

Next person we saw perform was Vince Staples. He had the crowd hyped the whole time. Vince Staples also included the video of Stevante Clark while he was protesting for his brother Stephon Clark, the young man killed by Sac Police last month. His set included other videos of Huey P. Newton, Angela Davis and other black panther activists. I love that Vince used his platform at Coachella to showcase black leaders.

After Vince Staples we watched Sza. Her set was so cute. She came out with a cup of tea and a coat on because according to her IG post from weekend 1 she wasn’t feeling well. So aside from her losing her voice, I loved her performance. Everything about her performance was fun. She sang all my favs from her CTRL album. She brought out Khalid and Isaiah Rashaad. She shared stories of the inspiration behind each song. She danced around stage, jumped on a trampoline, and just enjoyed herself the whole time.

The breakfast at our hotel was bomb AF! The omelet bar was my favorite. After breakfast we went swimming. Aaron and Ash met us at the pool, they brought their portable speaker and it turned into a pool party. LOL the pool area was packed so of course people was complaining about our music being to loud. But we were not going to let the haters ruin our pre-game for Bey Day.

The first person we saw perform on Saturday was Tyler the Creator. Although I am not a big fan he has some pretty good songs and the crowd went wild for him. He was performing on the main stage which was the same stage as Beyonce. There was also a girl group name Haim we watched perform right before Beyonce went on. We had to get a good spot in front so we only watched artists who performed on the same stage as Beyonce. Our whole Saturday was dedicated to Bey. Walking to any other stage would have been to risky. We literally had to fight to get to the front. It was so much pushing, pulling, and shoving to get to the front but the whole I was thinking only for Queen Bey.

It was alllllll worth it. Before Beyonce came on we hyped everybody in our section to start singing her songs. We met so many fellow beyhive friends LOL we were sharing snacks and keeping hydrated waiting for the Queen.

Beyonce’s performance was magically from beginning to end. I found myself tearing up a few times. I just couldn’t believe my eyes. She danced amazing never missing a step. Her voice was on point up until the very end. She literally KILLED the whole two hours. She brought out J Balvin, Destiny’s Child, Jay Z, and Solange. Her dancers were even incredible. There’s honestly no words to describe what I witness and the emotions I was going through.

Once it was over, I lost my voice and I was the most tired and thirsty I have ever been in my whole life. The crowd lined up to get water and go to the shuttle was insane. Even though we were all basically dead after that performance we had so much fun. Our bodies ached and the line to exit the festival grounds wasn’t moving so once we finally got water we put a blanket down and all sat down to rest and regroup. We laughed and hung out for about 30 minutes before the security told us it was time to go. We made so many unforgettable memories. Our crew was so funny and dope we even made moments like standing in line for water or walking to the shuttle fun. We were without a doubt the most turnt up ones on every shuttle ride. We were honestly the best Beychella crew of all time LOL! no but foreal 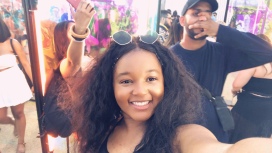 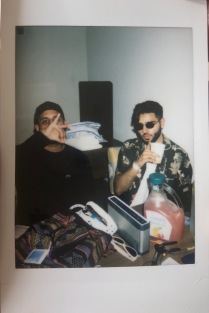 On the shuttle to the festival grounds, we met a guy who told us he had just survived a high speed chase with the cops. According to him his adrenaline was still pumping from doing 160 mph the whole way on his motorcycle. That’s when I knew this last day was going to be epic.

We got to the festival grounds 45 minutes before Cardi B performed. I made it to the front of the line and was told I had to go get my wristband re-registered. I stood in line for 20 more  minutes but was able to re-register my wristband and make it in time to watch Cardi B’s whole performance. She looked so beautiful and happy pregnant. Offset was in the crowd cheering her on and rapping every word to her songs which was super cute. She also brought out J Balvin to perform her song “I Like It” and SZA to perform “I Do” off her new CD.

After Cardi B we split up, while my mom and my god sister watched Jidenna perform I went with my sister and her best friend to watch 6lack perform. He was on a smaller stage so the show felt really intimate. He brought out Khalid and Ty Dolla Sign which was a great addition. I’m not familiar with a lot of his music but I loved the songs he performed. I am definitely a new fan now.

Miguel was the next show we watched. He was honestly my second favorite performer all weekend after Beyonce. His stage presence is unmatched. He is so smooth with so much sexy appeal. You couldn’t tell me he wasn’t singing to me and looking in my direction. During his set he said he was raised by his father from Mexico and his mom, a beautiful black woman from Inglewood. When he said that I lost it! His dance moves and his voice is so effortless. Man Miguel sure knows how to put on a show.

Migos had the most turnt up performance of the weekend. People were climbing fences to see them. The crowd was spilling out of the stadium. Everyone there was dancing and singing along. The migos brought out Lil Yachty and Cardi B. The crowd went wild when Cardi B came out with her pregnant belly. After her verse on Motorsport her and Offset embraced and everyone yelled even louder. It was just a real lit ass performance and a fun way to end the weekend.

We rode the Ferris wheel after we watched the Migos performance. Of course we made it fun and cracked jokes the whole time because some of us was scared of the ride. (I’m not saying no names LOL) My mom wanted to see Eminem because he was bringing out 50 cent and Dr. Dre. The rest of us watched for a little while but went to look around the souvenir store instead.

After the shuttle dropped us off at the hotel we begged Dominos to make us two large pizzas before they closed. We stayed up until 4am talking, laughing, and eating chicken wings and pizza. We exchanged music, tv shows, slang, and just shared stories about differences and similarities between America and the UK. We learned so much from each other and had so many inside jokes from this weekend. The guys kept saying “You guys changed my life” lol! The best part about traveling and trying new things are the people you meet along the way and the bonds that are built. Most of the trip we didn’t get phone service so we were able to really live in the moment and enjoy our weekend together. We promised Aaron and Ash we would keep in contact and visit them in England. This weekend was better than I could have ever expected.

I know this was a long post guys! lol but I had to let you guys know about my life changing weekend.

Thanks for reading we’ll talk more next week!

10 thoughts on “The Main Event”